On the initiative of academician A.P. Aleksandrov, the Magnetic Laboratory of the USSR Academy of Sciences was organized.

The magnetic laboratory is included in the Institute of Atomic Energy named after I.V. Kurchatov as sector C62.

The beginning of search, theoretical and experimental work on the direct conversion of thermal energy into electrical energy using MHD generators and thermionic converters.

Creation of a family of power supplies based on inductive storage devices with energies from 1 MJ to 1 GJ.

Sector C62 was reorganized into the Department of Plasma Power Engineering of the Institute of Atomic Energy named after I.V. Kurchatov.

A decision was made to organize work on laser topics and controlled thermonuclear fusion.

A record radiation power of 1 kW was obtained with a fast-flow gas-discharge CO2 laser with a self-sustained discharge.

On the basis of the Department of Plasma Energy, a Branch of the Institute of Atomic Energy named after I.V. Kurchatov (FIAE).

A pulsed plasma accelerator has been created, which makes it possible to obtain plasma bunches with an energy of 100 KJ and a velocity of 3.105 m/s.

A series of field experiments on deep electromagnetic sounding of the earth's crust using powerful pulsed MHD generators has been carried out.

Doctor of Physics and Mathematics was appointed Director of FIAE. Sciences (since 1984 - Corresponding Member of the USSR Academy of Sciences) Pismenny V.D. 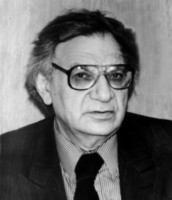 With the help of a repetitively pulsed CO2 laser, a weight amount of carbon-13 isotopes with a purity of 99.99 was obtained.

The "Angara-5-1" installation has been created - one of the world's largest generators of super-powerful (up to 12 TW) electrical pulses for physical research in the field of CTS and the interaction of powerful radiation fluxes with matter.

Work has begun to improve the safety of nuclear power facilities.

The physical start-up of the "TSP" complex (Tokamak with a strong field) - a tokamak with adiabatic plasma compression has been carried out. 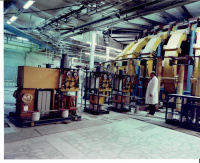 Branch of the Institute of Atomic Energy. I.V. Kurchatov was renamed into the Triniti Institute for Innovative and Fusion Research (TRINITI).

The Institute was awarded the status of the State Scientific Center of the Russian Federation and is maintained to this day.

As a result of joint work with RAO "Gazprom", a mobile laser technological complex MLTK-50 with a radiation power of up to 50 kW was created and tested, which has no analogues and is intended for emergency recovery operations and for solving a number of other technological problems, in particular, for cleaning the surface of reservoirs from the film of oil products.

Work has begun on the creation of the MOL installation - a test bench for the elements of the "Baikal" generator, designed to ignite a thermonuclear target.

Doctor of Physical and Mathematical Sciences, Professor V.E. Cherkovets was appointed Director of the State Research Center of the Russian Federation TRINITI.

Work has begun on the development of mobile laser systems for decontamination and fragmentation of solid radioactive waste.

Research has begun on the use of pulsed plasma accelerators in controlled thermonuclear fusion.

Research has begun on the use of pulsed plasma accelerators in controlled thermonuclear fusion.

Experiments were carried out at the Angara-5-1 facility of the State Research Center of the Russian Federation TRINITI in the interest of creating the Baikal thermonuclear facility. In the course of the work, world-class results were obtained on the three-dimensional compression of the substance of quasispherical wire liners with confirmation of the compact compression of tungsten plasma in the center of the liner and an increase in the spectral density of VUV radiation in the central region of the liner.

JSC "SRC RF TRINITI" together with VNIINM them. acad. A.A. Bochvar, models of protective coatings for the first ITER wall were made from Russian beryllium of the TGP-56PS brand. The prototypes were tested by plasma flows with parameters characteristic of transient processes in ITER (ELMs, disruptions) using a quasi-stationary high-current plasma accelerator KSPU-Be.

The mobile laser technological complex MLTK-20, created by the order of Gazprom Gazobezopasnost, made it possible for the first time in the world to eliminate the consequences of the accident at the gas well No. 506 of the West Tarko-Salinskoye field in record time. This complex was also successfully applied in 2011, 2012, 2013, 2014, 2015.

On the T-11M tokamak, in order to protect the walls, lithium has been successfully circulated between the vertical Li emitter and the longitudinal Li collector, which will be used in the T-15 tokamak and in the TIN-1 thermonuclear neutron source.

The institute has developed and tested a pulsed plasma toroid accelerator for unique neutron sources that has no analogues in the world.

A device for ultra-high charging of dust particles with an electron beam based on an anomalous glow discharge has been created. The possibility of obtaining a flux of ions and neutral atoms onto a target with energies up to 20 kV is shown.

A meeting of the Ignitor installation working group was held in Hamburg. The Russian-Italian project of the megascience class involves the placement of the Ignitor tokamak thermonuclear installation at the State Research Center of the Russian Federation TRINITI. The specialists of the institute prepared technical documentation, revised equipment and developed technical specifications for the modernization of the TSP complex (tokamak with a strong field) for the Ignitor tokamak.